This is the big one. The one lads have been priming up for. A steady climb up from Rabanal to the Cruz de Ferro, the highest point on the Camino route at 1505 meters, then a rapid decent down to Molinaseca at 610 meters before a big climb again to O’Cebreiro at 1330 meters.

By now Ihave picked up two stragglers who wish to be dropped off on route, as well as the bags of the two lovely ladies I met yesterday. All are to be dropped off at Manjarin just before the summit. This passes without a hitch and at this point I am caught up by Coxy and Steve K who are racing to be king of the hill.

Off they speed and I spot them again standing atop the Cruz de Ferro. I easy spot Coxy’s bright yellow shirt and Steve’s red and black. That’s the last I’ll see of them until the first meet up point at Molinaseca. Or so I thought…

As the rest of the group pass the Cruz de Ferro several of the lads lay stones in tribute.

As I begin the descent the road naturally meanders down the mountain and then after about five minutes I see Coxy and Steve pelting down over to my left and the blindingly obvious hits me smack in the face. The don’t slowly circle down the mountain but go straight down… at insane speed and they cross the road!!!

I continue down and as I travel along a brief straight section between the curves, something happens that has never happened to me before…

I’m doing about 35 miles an hour and looking dead ahead… there’s a bang on the side of the van, a might roar of ‘Ariba!’ and in a yellow blur, Coxy speeds past me and then dives off to the left, back down the trail.

I’m stunned. Totally stunned. A glance in the wing mirror sees Steve follow down the track in hot pursuit.

A thrilling moment, and a thrilling ride for all the lads who all agee when we meet up at Molinaseca that the descent was the highlight of the trip. And by far the most dangerous. 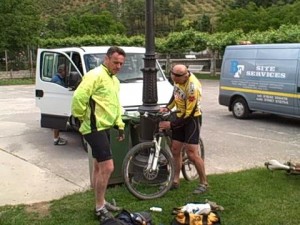 The middle point of this section passes fairly uneventfully for all and we meet again at Villafranca.

Now for the big ascent…

This is a tough, tough ride for the lads… as tough as the first day.

The climb to O’Cebreiro is 600 meters over 5 kilometers so it’s low gear and hard graft all the way.

O’Cebreiro, is not on the Sat Nav. No problem. Or so I thought. I set off from the last meet up point at Trabadelo around 5pm for the short 12 mile drive to the hotel. There are, in effect, 3 routes to get up there. I opt for what appears to be the most direct one. Big mistake. I end up in a tiny village called La Faba. Up very small single track roads… after La Faba the road just ran out!

Back down again to try option 2. I miss a turn somewhere and end up atop the adjacent mountain! A quick turn around the giant mast at the top and it’s back down again.

By this time the lads had reached the hotel and were wondering where the heck I was. And they were not too happy.

Neither was I as I now tried option 3. This was looking more promising until the fog came down. Well, I say fog, this is not fog… you are actually in the clouds.

>I crawl along… I can’t see anything. Literally just the front of the van. Then a light to my left. A very faint one and I inch towards it and pull up. Is this the village? It’s a hotel!! I’m here. Except I’m not. There is another hotel 200 yards away. On foot, I turn the wrong way again in the zero visibility and find myself on the summit. Soaked, frozen stiff and totally dissorientated. Coxy and Spenna are dispatched from our hotel to find both me and the van.

They locate the van first and then a very grateful me. Coxy then takes the van round for unloading.

All the lads are very understanding at my late arrival. Then, of course the ribbing begins in the bar.

‘Browny, how come you took four hours to drive just 12 miles… which pub have you been in, etc’