A number of the lads have taken part in the Sportive challenge of the Coast to Coast in a Day.

They put in a fantastic effort in tough conditions… you can see the results here…Well done Lads!!

After taking part in last years ” C2C in a day challenge ” I decided to give it another go.

As luck would have it a friend of the family offered me his digs in Seascale which where the ride starts, after a sleepless night in a tent last year this was brilliant news.

Armed with somewhere to sleep I managed to talk the a few of the lads to take part. A month before the ride the owner of the digs informs me that he has moved from Seascale to St Bee’s, its only 4 miles away he tells me and we’re still welcome to use them, what he didn’t tell was where they were 4 miles from ?…

The big weekend arrives and we head over to Seascale on the Friday night, we arrive around 10:30pm and make our way to registration for our timing tags & map etc, then we are to cycle along the coastal path to St Bee’s.

We set off across the sand dunes in total darkness carrying a bag each and none of us with lights, we soon pass the Sellafield Nuclear plant where two guards armed with semi-automatic weapons look on bemused as we appear out of the darkness.

We speed up but they stop Camma and ask him what he’s up to, a quick interrogation later and were back on track, still no sign of our digs.

Eventually we arrive 12 miles later, its now gone midnight. We settle in for the night with alarm set for 3:30am and are up for breakfast and set off for 4am.

We opt not to go back along the beach but instead to Egremont then onto Seascale, its a 12 mile ride to the start line, not ideal but it is what it is.

We decide to set off in two groups, Ade, John, Marty & Steve get away at 5:30am with me, Camma & Spena hanging on for half an hour.

The plan was to catch the up at Sedbergh then work as a team across the dales. 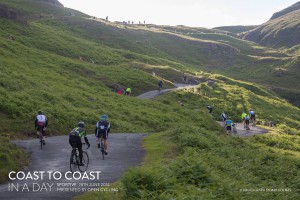 As we reach the Hardknott pass we are met with a long chain of riders struggling up the toughest climb in the UK, half of them are walking and its tough going trying to weave through them whilst remaining upright.

Once over the top we descend and head for the Wrynose pass, another tough one but not in the same league as Hardknott. After Wrynose we pick up speed passing John near Little Langdale, we are soon at the ferry and join about 100 cyclists for the short trip across lake Windermere.

From there we head for Kendal and the first feed station, we’re in and out quickly and then its a tough climb out of Cumbria. As we cross the M6 and head for Sedbergh we pick up Ade, Steve & Marty, perfect planning so far, we line the peloton up and get ready to go but as we turn east towards Hawes we hit a strong headwind and the peloton splinters before it even gets going !

The wind is really strong and everyone struggles to maintain any decent speed, after an hour we reach the second feed at Hardraw, we are all knackered at this point and spend more time at the feed station than planned.

Any chance of breaking 10 hours today was gone, we head off wondering if we were going to make Whitby before dark !

At around the half way mark the wind swings around a little and the going gets a little easier, we pick up a few passengers and start to work together and are quickly at the third feed station at Tunstall.

We are down to four as Ade & Marty have disappeared off the back. From Tunstall we set off and are soon at full speed, we pick up the odd rider here and there which makes thing easier but as we go through Brompton onto the main road to Osmotherley trouble starts as all 4 of us start to run out of steam on this long hilly stretch.

We arrive at the last feed station at Ingleby Greenhow in dribs and drabs and are all in desperate need of fuel, a couple of Pork pies and a slab of Quiche later and were off, 28 miles to the finish.

This event is in its third year and the last leg has become somewhat notorious amongst participants, the fear & dread is all apparent at the last feed station.

Fuelled up on pies we motor along the Esk valley finally reaching Whitby around 4:30pm.

There is a big crowd waiting and every rider is cheered to the finish line. Ade & Marty come in about an hour later ” never again ” they both mutter.

John is still out there somewhere, he always knew it was going to be a long day but never the less he kept spinning his legs until he reached the finish line a few hours later.

Another brilliant day made tougher by the wind.

Well done all the lads!

Kudos to John for finishing and also Camma for pushing a 39t front ring all day.

Roll on next year… 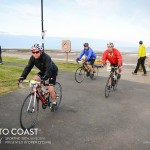