I’ve created a mobile phone app based around the card game of Snap and some of the cool pictures from our bike trips.

It’s called Snap Cycle but you won’t find it in the iStore or Google’s App store. Also, as it needs a touch screen to function, it will only work on a smart phone or tablet.

Please read ALL the instructions below on how to play the game before accessing the app.

1. On a tablet or smart phone, open up the internet with your default web browser.

2. Then in the ‘Search or type URL’ box type the following URL:-

NOTE: You must type it EXACTLY like that (case sensitive).

3. Then hit enter or Go, the app opens and you’ll see the following: 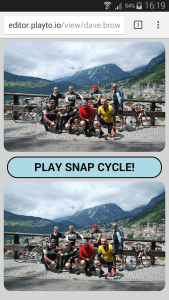 The idea of the game is like playing snap at cards and you’ll need TWO people to play.

To start the game hit the ‘Play Snap Cycle!’ button in the middle of the screen.

Then different pictures are loaded randomly in the top and bottom halves of the screen like this:- 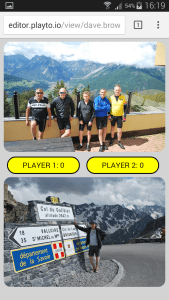 Player one takes the top half of the screen and player two takes the bottom half.

WHEN THE PICTURES MATCH, in the top and bottom halves of the screen, you have a snap and the winner is whichever player taps their part of the screen first to register the match.

A score will be recorded and the first player to two matches wins the game.

Be careful because getting it wrong results in a negative score.