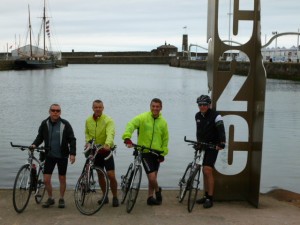 This is the big one! An attempt to do all 134 miles of the Coast to Coast, from Whitehaven to Sunderland, in one day. We usually take three days to do these rides but it’s the hard-core bike rider’s ambition to complete the trip in a single day.

We need to start at the crack of dawn on Sunday to have any chance and so we set off for Whitehaven on Saturday evening hoping to find digs for the overnight stay. No chance as there’s a major Maritime Festival and Showaddywaddy are in town!

We trawl the dodgier parts of Whitehaven hoping to find a pub with a bit of greenery nearby where we can pitch tents but with an open trailer with the bikes in we decide it’s too risky to leave them unattended and head back out of the town to find a camp site.

No luck here either so we find a restaurant for some much needed refuelling and aim to pitch our tents in a field somewhere after dark. Not the best preparation for tomorrow’s tough ride! But we get lucky… an enquiry to the landlord about nearby camp sites leads to the guy offering for us to pitch up on the land next to the restaurant. A great result and a big thank you to Oily’s Bar, Whitehaven.

After an uncomfortable night on the lumpy ground we rise at 4.00am, pack up the gear and head for the start at Whitehaven harbour. The lads get away at 5.00am on schedule and the trip is off to a dry, if very cold start. There’s a biting wind coming from the east which will be in the lads’ faces all the way to the finish. Then things start to go a bit awry…

Aiming to head off to the first meeting point at Threlkeld, near Keswick, I jump in the car but it won’t start… It’s been fine up to now… surprisingly at this point Johnno, up very early in the Boro, calls me to see how the lads are getting on. I explain my predicament but there’s not a lot he can do so I have no choice but to call Ade and he has to come back to assist and abandon his C2C attempt. Ade has no joy starting the car either so we contemplate our options. To cut a long story short It’s decided that Johnno will come over from the Boro and use his AA membership to get us going again. I know it seems mad now but… big cheer for Johnno for riding to the rescue… but…but… 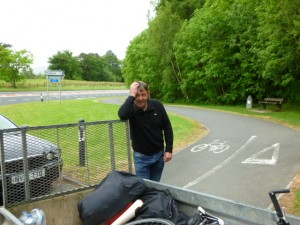 Just as Johnno reaches Keswick he calls us to let us know where he is, we try to start the car again and it starts!! So we set off for the first meeting point and arrange to meet Johnno there. Naturally he’s not a happy chappy.

Then as Ade and I hit the dual carriage way outside of Whitehaven we notice something flying out of the back of the trailer. We pull up as soon as we can only to see Spenna’s pop-up tent high up in the air and heading for Ireland. This is not the best of starts.

Throughout the rest of the trip the car adopts a mind of it’s own and sometimes starts after each stop and sometimes doesn’t. Happily this does not hold the riders up at all so I’ll say no more about it.

We reach the first meeting point at Threlkeld, near Keswick, arriving just 5 minutes behind the lads who have had a tough climb out of Whitehaven through the Lakeland hills fighting a biting easterly wind all the way. 34 tough miles and at this point most C2C riders are usually stopping for the day but for us it’s only 8.00 in the morning and the lads still have a long way to go and some very tough climbs ahead.

After a brew up and some cold pasta the lads set off for another tough climb before descending to Langwathby which is a few miles east of Penrith. Another hard 24 miles and the wind is just not letting up and the hardest climbs over the Pennines are still to come.

At this Point Johnno leaves us to return to the Boro and Ade decides to tackle the 3rd leg from Langwathby to Allenheads. 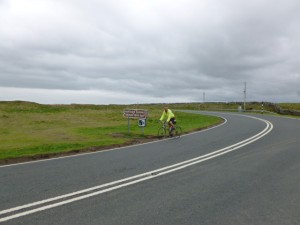 The first big obstacle is Hartside at 1903 ft and driving up it, it reminds me of the tough Colls we have tackled in the past in France and Spain. It’s grim at the top, strong winds and dark skies but there are still loads of cyclists on the route. Many people were bound to pick this extended holiday weekend to tackle the C2C but the lads don’t meet anyone else who is attempting it all in one day.

We stop on Hartside summit for the lads to get some warm clothing for the descent but arrange another stopping point before the next big climb at Garrigill. Ade has finished his big workout for the day and now rejoins me in the support car.

After Garrigill comes Back Hill, the highest point on this C2C route and another really tough climb before descending into Allenheads for another refuel stop.

The lads are now aching in places they didn’t know they had but they still have nearly 50 miles to go with three more big climbs before they can even begin to think about the finish line. 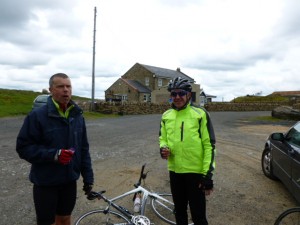 Leaving Allenheads the lads know they will pass the point where they beat the mileage limit of anything they have tried before in a single day and at the start of the Waskerley way will have completed over 100 miles.

As we meet them there it is clear that only sheer bloody mindedness and determination are now keeping them going but the end is now in sight. They still have 35 miles to go but the worst is over and they now just need to push on downhill to the finish in Sunderland.

The lads arrive at the finish around 7.30, 14 hours since the start with some 11 1/2 hours in the saddle, tired but triumphant. Another great achievement… 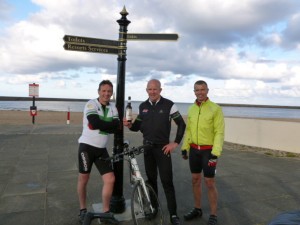 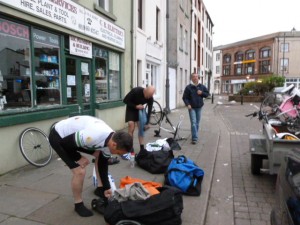 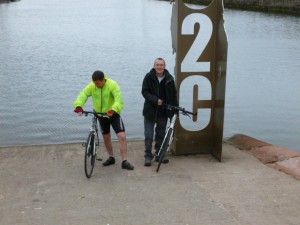 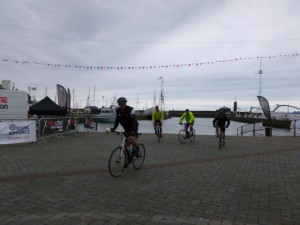 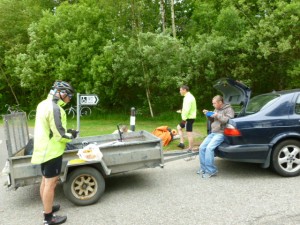 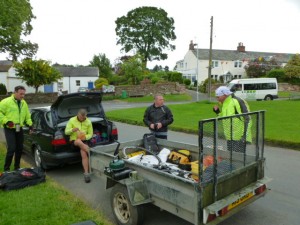 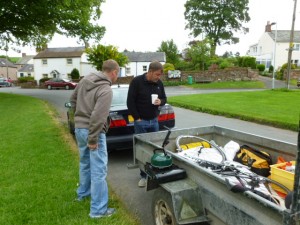 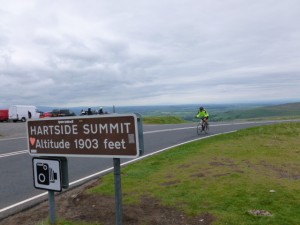 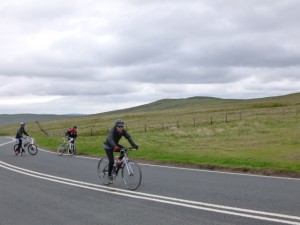 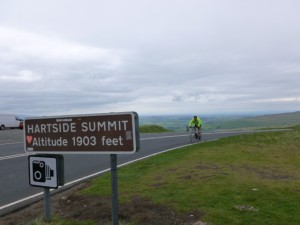 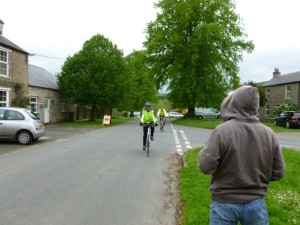 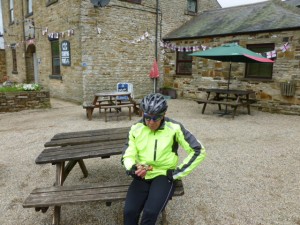 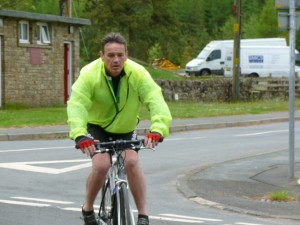 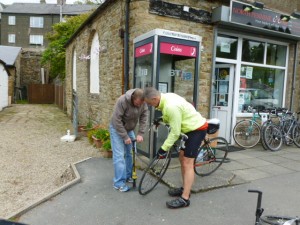 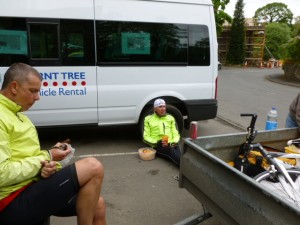 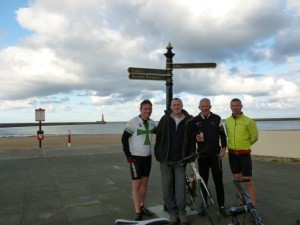 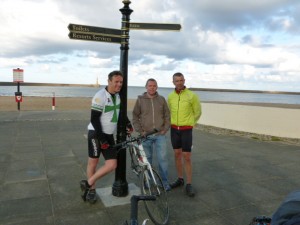