After arriving at Avignon we headed for the small village of Bedoin which was our base for the assault on the famous Mont Ventoux.

This mountain stands at 6,273 ft and often figures in the Tour de France.

After tackling the mountain we then headed to Sete, via Arles to pick up the Canal du Midi cycle routes following the canal to Toulouse. From Toulouse the lads took the train to Tarbes and from there we made the short trip to Bagneres-de-Bigorre.

From Bagneres-de-Bigorre we then tackled another of the Tour de France’s legendary climbs, the Col du Tourmalet and eventually finished the ride at Lourdes.

To see how we got on check out the blog posts below:-

To watch the videos of Le Tour click here:- 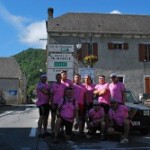 At the start of the Col du Tourmalet