It’s that time again, our traditional Donkey Derby on the last day. Basically Coxy sets off last and it’s then a case of how much time he gives the other lads.

The debate on this went on throughout last night’s session in the Cafe du Paris and continued back at the cabins and it’s still going on this morning! But the times are now fixed:-

So this is how long each of them set off before Coxy:-

We want to get away before the temperature gets too high so Johnny sets off at 7.00 am sharp.

Once he’s gone we count down the clock and set off each rider at his allocated time. Some of the lads are doing a short circuit round the camp to warm up before the off but Marty’s is still on this circuit with just 1 minute to his time…

He’s obviously trying to get a flying start and be already going full pelt over the start line! But we’re wise to his game and stop him dead….

All the lads get off and finally Coxy gets going at 7.40 am.

After a bit of breaky I then head up the Col chasing them down. I finally catch Johnny at switch back 7, over half-way up, having passed all the others. Has the order changed yet?

Only slightly… Steve had caught and passed Doggy and Ade and Gibbo had passed Marty (so his shenanigans at the start aren’t paying off!)

Spenna, Roly, Ian and Coxy are still below me, not far but I can’t see them so I can’t tell how they are doing and I have to push on to the finish to be ready for the lads coming in…

I arrive and get into position around 8.30 am so the leaders should be getting to me in about 20 – 30 minutes…

Unlike yesterday, when I could see the lads coming up, today I’m in the town centre so I can only see down the road 150 meters… who’s gonna pop up over that final hump first?…

As the clock ticks down the tension mounts. It’s unbearable… what’s going on down there?!!!

A few minutes later and another red shirt comes over the top…and this time it’s definitely one of ours… and no mistaking that riding style… It’s Spenna!

And there’s no-one directly behind him to challenge so he’s this year’s winner! A brilliant effort!

He’s followed shortly after by Ade who Spenna only caught on the last bend before the top. A great ride by Ade.

Next up is Ian a minute later who podiums on his first trip!

A couple of minutes later and Gibbo and Chucky arrive, just seconds apart with Coxy chasing them down all the way but he’s ran out of road.

Within minutes Steve is up and  then Johnny G and Roly cross the line together. Marty is next and then Doggy brings up the rear.

What a great morning and a top effort from everyone!

But now it’s still a bit early… what we gonna do for the rest of the day?…

The lads decide to head back down the Alpe and then take another balcony road across to Auris then down and back to camp. I can’t get over this one (thank God!) as it’s too narrow so I go down and round and meet them at the Auris.

It’s another cracking ride over this balcony for the lads with some more scary narrow tunnels and after we meet up it’s all back to base.

So that’s the end of this years riding! What a great trip, even if it has been a little too hot at times!

Thanks as usual to Coxy, Ade and Spenna for organising such a great trip and Marty and Gibbo for looking after me in the cabin.

Special mention for this year’s new guys, Doggy and Chucky who have put in a great effort and of course Ian, who not only completed the Marmot but got on the podium in the Donkey Derby!

And of course the rest of the lads, Johnny, Steve and Roly for their great company.

What will next year bring?… 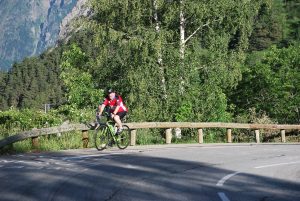 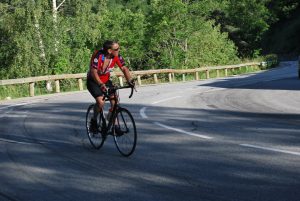 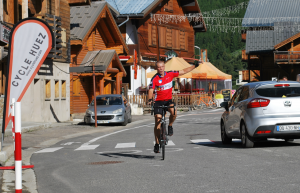 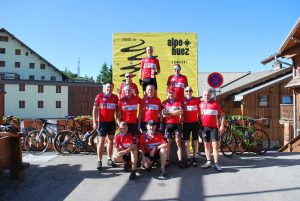 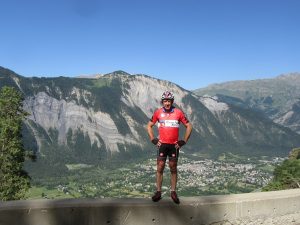 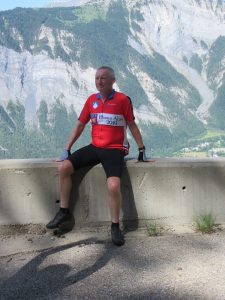 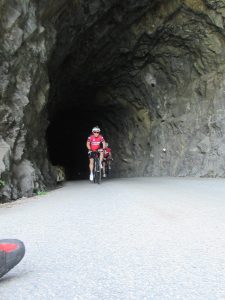