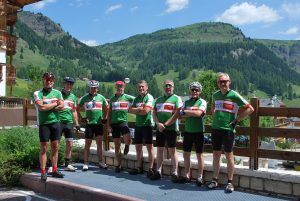 A couple of tough climbs today but we set off late as there’s a Lions v All Blacks rugby match to watch first thing. Sadly the Lions got beat so it’s on to the main business of the day.

We set off for Caprile in blazing hot sun and it’s here that we take the turn onto the Passo Fedaia and start the climb to the 2000m+ summit. As usual I wait a third of the way up to take some snaps, fill bottles and relieve them of their bike helmets.

It’s really tough going in this heat and the lads are strung out along the pass as we climb higher up to the summit. The closer we get the gradients ramp up over 15% and this is proving to be one of the hardest climbs yet. 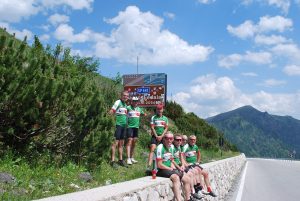 Eventually everyone makes it up OK and we then descend to Canazei. It’s a fast spectacular descent not helped by the amount of traffic on the roads. It’s chaos with a Porche rally going on, other sport cars, coaches, cars and maniacs on motor bikes as well as hundreds of cyclists.

Canazei is a really pretty Alpine village and after a good lunch we set off for home via the Passo Pordoi. Some of the lads went up one side of this yesterday but this time we climb the other side and then descend back into Arabba.

It’s another tough climb with 25+ switchbacks and all the while dark clouds gather ominously over the peaks. Thunder and lighting follow us up and it’s touch and go whether we’ll avoid the worst.

Most of the lads make it by the skin of their teeth but as John reaches the summit the hail starts crashing down and I’m assuming he’s gonna jump in the van. Not this time!

John chases me off and heads down over the top as I follow. I catch up with him sheltering in a tunnel but he still refuses to get in so reluctantly I leave him to it.

All the way down I see cyclists hiding off the road from the storm and I assume John’s going to be a long way behind when I get back to the digs. 10 minutes after I get back and here he is!

I’m gobsmacked but then it is beer time so…. 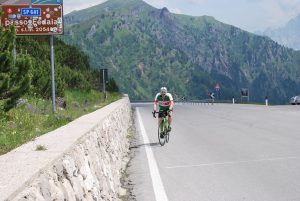 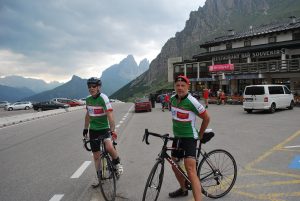 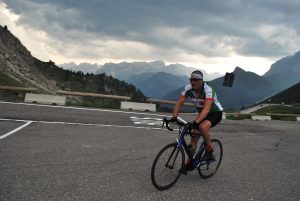