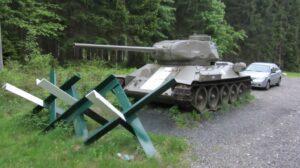 The journey down to Luton was good with low traffic so we made good progress, went through check-in at the airport immediately, straight through security with no issues and were in the departure lounge 2 + hours before the flight.

We took off on time and arrived 20 minutes early, picked up the hire van, and were away and due at the digs in 35 -40 minutes and before 5pm. All good so far…too good…

As I drove down to Luton, Ade was doing this shift with me and Spenna as passengers. The other lads were in a minibus behind us.

We’ve got a problem with our usual Satnav in that it won’t fully download the maps for Slovenia and Croatia. (I’m trying to fix this now). But to get us to Kranjska Gora, Spenna takes on the navigator role using Google Maps on his phone.

You already know where this is going, right?…

About 20 minutes out Spenna switches off his phone… he knows the way… course he does.

Ade says there’s a sign to Kranjska Gora there on the right… Nope, says Spenna, keep straight on this road… so we do… and then we come to a tunnel…  a long tunnel…7km long!

At the other end of this tunnel is what looks like a border crossing… and that’s because that’s exactly what it is. We are now in Austria on the road to Italy!

So, we have no option but to take another route back over the mountains we’d just been under in the tunnel.

What a pass it turns out to be. It’s called the Wurzen pass and it is very steep. 18% for what looks like 3 miles of it. There’s a tank guarding the top but happily we don’t get stopped (or shot at!).

Of course, by now the other lads are at the hotel wondering where the hell we’ve got to but we arrive eventually and are now settling in. The lads are assembling their bikes and once done we’ll have a wander around and get some eats. Looks a lovely place, very Alpine.