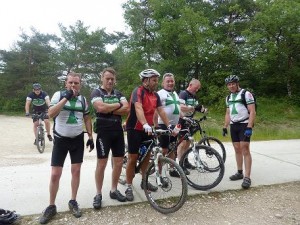 This was an easy day for the lads.

Not so for me in the van. Priority was to find a bike shop for Steve. Easy with Sat Nav except Estella is a big town… one ways, etc. But the Sat Nav plonked me just 100 yards from the bike shop. Great! Just enough time to find out it was closed and pick up a 40 Euro parking charge!

Out of the city I go and park up waiting for the lads t0 arrive. The phone call comes in and the guys are at the bike shop so I head back over there. Of course they are at a different bike shop.

The phone conversation at that point was quiet surreal…

‘NO I’M at the bike shop’… etc. (the language got fairly colourful after that….)

We eventually rendezvous and head to the next check point.

However Steve K still couldn’t get the part for his bike and is forced to battle on. Spenna got himself a nice pair of shades, all wrap around, with spare lenses, etc. Nice price they were too!

An easy ride for the lads to Los Arcos, they even arrive before the van. All in a good mood except for Spenna. The first time he took those pricey shades off they snapped!

So, it’s back to Estella for me wondering how the heck I’m going to convince the guy in the shop to give me a refund. I’m not in bike gear, he’s never seen me before and I can’t speak Spanish.

I arrive back there at 2.30 ish and find the shop shut! Seista time…

Steve D and Howard has some fun on the next section going some old stone hump back bridges. These are quite tricky to negotiate on a bike with those locking pedals the lads use. Wrong gear and you go no where and if you don’t flick your feet off the pedals… over you go.

Steve takes a tumble at the first one  (pictured)… at the next one Howard shouts out a warning to Steve and then promptly does the same thing! 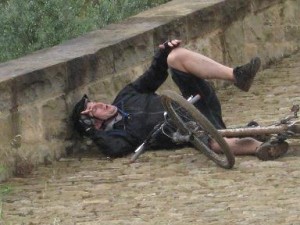 Another easy section for the lads to Vianna where the Hotel is. Except it isn’t… no-one has heard of the Parador Olite. Nothing on the Sat Nav but a Parador de la Olite some 70 miles in the opposite direction.

Nothing for it but to press on to Lograno and find an alternative.

What a result! The Hotel Lograno is great but even better there’s a festival going on. We think it’s got something to do with the Basques defeating the Moors.

Thousands of people… parades or medieval knights… fireworks… and the biggest open air barbecue I’ve ever seen. Whole piglets were whirling round above the flames.

It was an awesome evening but I still think Johnny G was a bit over the top buying a whole piglet for himself!

Another massive storm ended the festivities. The square turned into a river and we got soaked again. What was that about the rain in Spain?