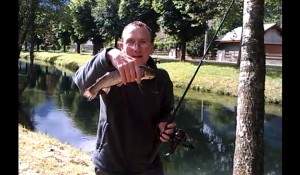 It’s a free day for the lads today. Some are going out on a short climb while others are just chilling around the camp site. They don’t need me so it’s time for a spot of fishing.

There are some wonderful rivers, streams and lakes around here but many of the rivers are very fast flowing torrents. However passing right through the centre of Bourg D’Oisans is small shallow stream. The water is very clear and you can see the trout cruising under the bridge.

We haven’t seen anyone fish in town though so I think it’s probably not allowed. But this stream also passes round the back of our camp site so that’s where I head with Ade.

As we get there we can see the trout but they are easily spooked in the clear water and a bit of stealth is required.

After several failed attempts Ade climbs up a tree to get a good view of a decent sized trout lying in the shade whilst I cast down to it.

With Ade’s help I can guide the bait right under the trout’s nose and he takes it!

After a short struggle the fish is on the bank and we take a photo before returning the fish alive back into the stream. It was simply too beautiful for the pot.

Now it’s Ade’s turn but whilst he’s fishing a guy comes along in his car on the road on the opposite bank. He stops and just glares at us for 5 minutes before screeching off. Two minutes later another guy does the same thing only he makes a casting gesture that’s tells us we should only be using a fly and not bait.

We’re pretty sure that if we carry on fishing there will be a complaint to the camp site and we don’t want that so that’s the end of our short fishing adventure but it was fun whilst it lasted.