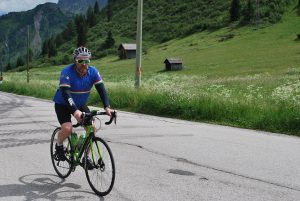 As you know we weren’t able to do our planned route today due to road closures and bad weather.

However the lads were finally able to get away at 3pm and the plan was to cycle the four passes of the Sella Ronda.

I can’t set off until the road opens at 3:30pm but before I do I get a call from Marty, he’s got a broken spoke and the bike shop in Arabba hasn’t got his type. So, I pick him up and we plan to get it fixed in Corvara at the end of the first pass, the Campolongo.

Due to the delay I don’t catch up with any of the lads, apart from John, so no snaps (apart from the quickie of John above.)

In Corvara none of the bike shops have the right spoke apart from one who thinks he can get hold of one. So, Marty in going to stay and wait while I push on.

Before I do Ade phones, him and Gibbo had missed the turn to the second pass and over shot by 3-4 miles so are heading back to Corvava where they meet up with Marty and John. Gibbo presses on with the route but the others try another bike shop that they’d spotted outside of Corvara and then head back to the digs.

Finally I push on over the Passo Gardena, passing Gibbo on the way up and still not finding any of the leading group at the summit I head down and then up the next pass, the Sella.

Two thirds of the way up I stop at a group of Cafes and see if I can spot any of the lads. No joy as they must still be ahead of me. So, still no snaps.

It’s at this point I get another call from Marty. No joy on the spoke. They can’t fix it until tomorrow. So I head back to pick him up knowing the leading group are probaly now on the final pass, the Pordoi and almost home.

As I head back down and over two passes I should see Gibbo coming the other way but I don’t. There’s so many cyclists on the road it’s easy to miss one rider.

Anyway, I pick Marty up and we head back over the Campolongo and home.

Everyone’s back at the digs now except Gibbo. Where is he?….I’m sure he’ll turn up soon…

One thought on “Four Passes – No photos”