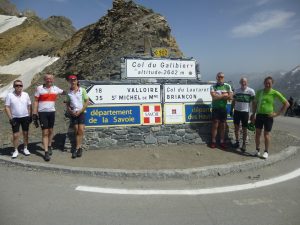 This is it the big one… four Cols in one day… pretty epic… can we do it?!

It’s a very early start at 6 am, mainly to give us a chance to get a good way round in this heat so we head out to the start of the Col du Glandon and make reasonable progress to the half way point.

(BTW Johnny’s in the van with me today for extra support and photo duties.)

Coxy gets to us first and it’s a good 25 minutes before all of the rest of the lads get to us and re-fuel. But I’ve made a schoolboy error…

It’s critical we get to the top of the Glandon before Coxy so he can take on more water but I’m gauging things on the kilometer markers for the climb.

I think he still has 11km to go to the top of the Glandon. But those markers are for the Col de la Croix de Fer which is on the same road but 3 km further on so I’ve over estimated the distance he has to go and, long story short, we fail to catch up with him.

After they have topped up on water, etc we head down the descent and its a very tight windy one, I’ll never catch up to Coxy on this!

Can we catch him on the flat stretch over to the start of the Col du Telegraph? It’s a main road over this section but it’s very busy with roadworks etc, horrible for the lads to cycle and it’s slowing us down even more… 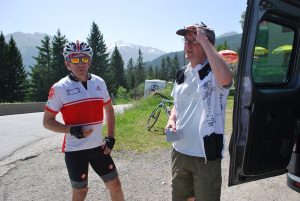 We get a call from Coxy. Expletives deleted but he wants us on the Telegraph now! He’s out of water and had to stop in some shade till we get there. We’re actually on the Telegraph at this point so we race up to meet him and get him sorted and then head for the summit.

Coxy arrives shortly after and now heads on the to next climb, the giant Col du Galibier.

But the rest of the lads haven’t yet reached the top of the Telegraph. We estimate he’s an hour ahead and it’s going to be even more by the time he summits the Galibier so the plan is to wait for the lads here then, once they are sorted, try and chase Coxy down up the Galibier…

The lads arrive but they too are struggling in the heat and are short on water so we’re going to have to get to the top of the Galibier and then come back and support them on the way up.

We hammer across and up trying to chase down Coxy but fail yet again! He’s already up and over and down the decent back to Bourg d’Oisans and the start of the final climb up the Alpe d’Huez. He’s on a different level now!

But the heat is brutal now and Coxy decides it’s not worth attempting the final climb in the mid-afternoon heat and heads back to camp.

So we head back and support the lads over the Galibier… and it’s then down the descent. We’ve travelled this road before and know there are tunnels, lots of them with the first being very narrow and dark. It’s bad enough driving through them, really scary on a bike!

John and I get back to Bourg and I drop him off at the campsite and then return to the start of the Alpe d’Huez to see if anyone fancies it.

I’m expecting no takers but Ian, Roly and Spenna decide to give it a go and we set off in the unbearable heat.

I stop about a third of the way up but only Ian and Roly get to me, Spenna has had enough and gone back down…

But it is later now and up here, surprisingly cooler so Ian and Roly push on. I stop and wait about 2/3 of the way up and once they get to me and are re-filled I head back down.

They both got up to the summit and are now back safe. Hats off to the pair of them for a fantastic effort! And everyone else for completing over 100 miles of very tough climbing in searing heat.

Also a mention to Doggy and Chucky who weren’t going to attempt the full Marmotte but did the Col du Glandon and Croix de Fer. A brilliant effort on their first trip! 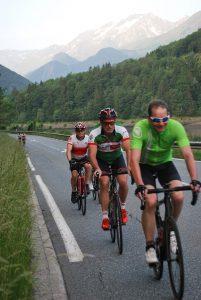 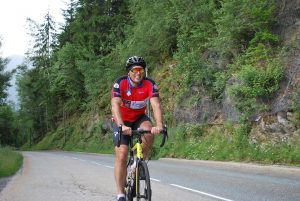 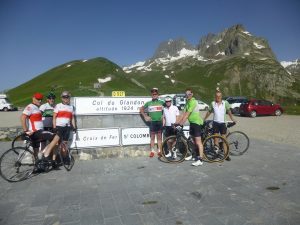 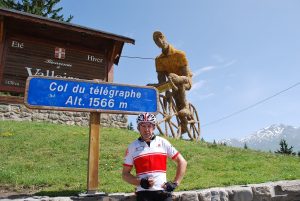 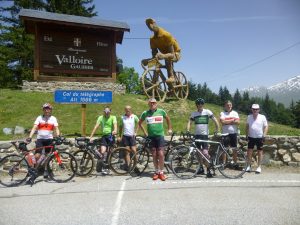 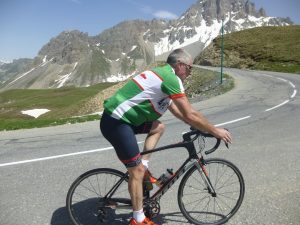 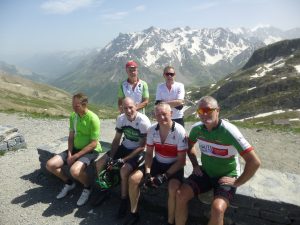