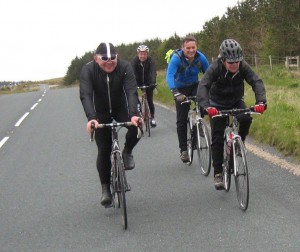 An early warm-up for the upcoming French Alps and Lejog tours and an ambitious route was planned to get some real miles into the legs.

The plan was to head for Richmond, then down towards Leyburn and Askrigg, turning off to tackle Buttertubs pass before heading for Kirkby Stephen and finally back over Tan Hill to Reeth.

The weather wasn’t too bad as we set off from the Bluebell on Saturday morning but it worsened as the lads rode towards Richmond with rain showers are a very cold wind. Once at Richmond it’s just a short hop to Reeth normally but the plan was to go the long way round.

Disaster struck for Billy as they approached Askrigg as he touched wheels with Wagga and took a tumble into the nearest dry stone wall. Fortunately his helmet saved him and he just got a slight cut above the eye. But he’d also yanked a thigh muscle and was out of action and into the the car with me. 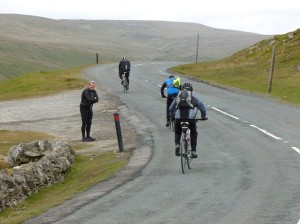 On to Buttertubs pass, a really tough climb and in a hail storm the lads struggled up to the summit. It’s a nasty one and has a wicked climb after the point where you think you have hit the top.

Then it’s a fast downhill to pick up the B6270 and then hang a left to Kirkby Stephen and another 35 miles with Tan Hill in the middle. Or you can hang a right… and go the 12 miles downhill to Reeth.

It was a tough decision but with this being the first big ride of the season the lads decided to give Tan Hill a miss and we headed into Reeth to get ready for the FA Cup Final.

In Reeth we stocked up on bacon, eggs and beans for the morning and decamped to the digs. A fairly large cottage which is used by a local school as an outward bound centre. There are 3 bedrooms with bunk beds and they are all kiddie sized but I’m surprised to see all the lads cram themselves into one room. 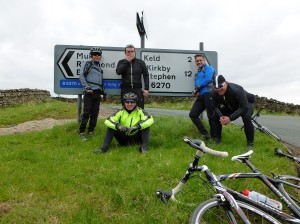 So I take a room for myself and make myself at home. It’s bloody cold in here though…

Off to paint the town red we head for the Buck Inn for refreshments and watch the Cup Final. Excellent meal but a dodgy decision gives the cockneys the final.

On to a tour of Reeth’s night life … well the other pub. A good night was had by all and it’s back to the digs.

The lads are cosy in their room with the heater but my room’s really cold and apparently it’s haunted!! By a little boy who was drowned in the nearby river…

I do get woken in the night but it’s only Billy sneaking in to get away from Wagga’s snoring. We get through the night without further interruptions but I keep dreaming about running water… and in the morning after getting out of bed I find the floor’s soaking wet.

There’s a great big puddle in the middle of the floor. Was it the ghost or has someone not gone to the place they should have?

Billy cooks a big breakfast which is appreciated by all and we leave Reeth and our watery friend behind. The lads add another climb over High Moor to Ravensworth and then it’s on to Hurworth, Yarm and home.

Another great weekend! You can see more pictures from the trip on the Reeth May 2012 page. 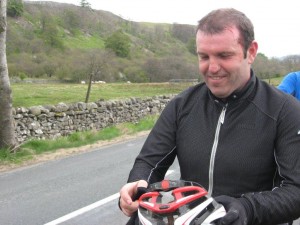 One thought on “Buttertubs Tamed”