Today we were due to tackle the Col du Galibier but we woke to torrential rain and low clouds blotting out all the surrounding mountains. It looks grim and we decide to tackle the big one tomorrow.

But being The Coastbusters there’s no way we are sitting around doing nothing all day so we decide to tackle the Col d’Ornon but with a difference.

Coxy has worked out a route that cuts off from the Col d’Ornon and climbs to the top of the adjacent Col du Solitude for the descent back to base. There’s only one problem, we’re not sure if I’ll be able to get between the the two at the top as there is only a black dotted line on the map.

We set off at 1.00 and the weather is still grim but just as the lads set off I find the van is bogged down on the grass next to our cabins and they have to pause to push me off. 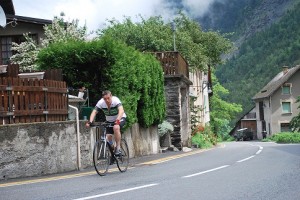 The climb up the Col d’Ornon is steady but spectacular and Colmer and I pause midway up to wait for the lads. We don’t have to wait long before they pass us but Johnny G has again been struck by his puncture curse.

After he’s been patched up we head up to Villard Remond where we hope to find a route over to Villard Notre-Dame at the top of the Col du Solitude.

No luck, it’s just a narrow rubble path and there’s no way to get the van through so I head back down the way we came up.

It’s a hairy ride down as the road in many parts is only wide enough for one car and there’s a sheer drop on one side and the steep mountain side on the other.

The rubble pass across to the Col du Solitude is too rough for the lad’s road bike tyres and they have to carry their bikes as they yomp across the mountain tops. 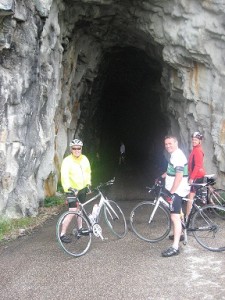 The descent is thrilling as they power down the massive mountain that overlooks the back of our campsite until they get to the Tunnel of Death midway down. There are no lights in tunnels like these up here and the lads have no lights on their bikes apart from a Johnny G’s red flashing rear light.

Into the tunnel they go, hoping nothing is coming the other way, and continue the descent back into Bourg  d’Oisans.

Marty who had set off later than the main group missed the turn off towards the Col du Solitude and continued on to Ornon itself so he arrived back an hour after the lads.

Tomorrow we tackle the Col du Galibier no matter what the weather! 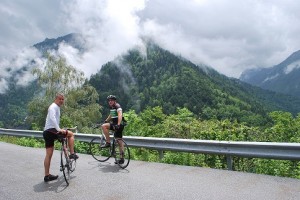 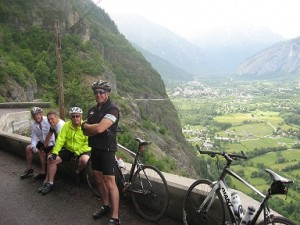 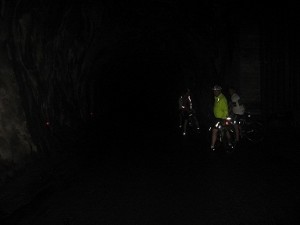 To see more pictures from todays ride visit this page