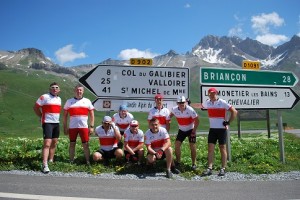 This is the big one, to tackle the Col du Galibier from the steepest but shortest route and then power down the 18km decent into Valloire before heading up to the top of the Col Du Telegraph.

We arrive at the Galibier and the lads begin to tackle the steep ascent and I head up to a vantage point half way up. The view is as spectacular as ever and I can see the lads strung out far below. They can see me high above them but only because I’m waving the large England flag we brought with us. 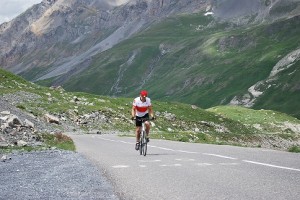 Spenna and Coxy are soon at the point where I am and the battle for the King of the Hill is on. The rest of the lads arrive shorty afterwards and I head on to the summit to witness the conclusion of the race up.

It’s incredibly tight but on the final bend a burst by Coxy takes him past and over the line as King of the Hill.

All the lads make it up and a big hand to Colmer who made it up and claims his first Alpine scalp.

Now for the descent. Think the Italian Job and you’ll get the idea. It’s a thrilling ride down for the lads at speeds of up to 40 mph between the hairpins and they get to Valloire way before me. As I head down the pass it’s a real white knuckle ride as I wind my way down over the sheer drops.

About a third of the way down I spot a small aeroplane below me in the valley. He flies up level and heads over the top of the Col du Galibier before returning back down and away.

I meet up with the lads and we then head off towards the Telegraph. I go straight to the top and the lads arrive surprisingly quickly a short time after. This is actually the easy side and does not task the lads much at all so It’s back to Valloire to start the car pick-up, etc.

But the lads decide they want to go back over the Col du Galibier the really hard way. Back up that 18 km descent!

Off we set and it’s a long, long climb up as Coxy and Spenna once again battle for the Polka Dot jersey. 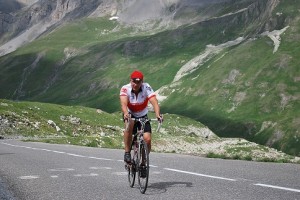 It’s utterly tortuous as they grind their way back up to the summit swapping places as they vie for position. Bend by bend the battle rages but close to the summit Spenna starts to open up a gap which he holds to the finish and gains revenge. 1 – 1 on the Galibier.

Special mention has to go to Johnny G who was again struck by his puncture curse at the start of the real climbing back up the Galibier. Easy option… jump in the van… hard option… battle on. John battles on…

As the lads wait at the top and watch John far below making his way up the weather turns on us as the mountains plot their revenge. We’ve conquered them… now it’s their turn…

As we begin our descent there’s a flash of lightning and then the rain starts and boy, does it come down.

The ride back down the steep side of the Galibier is terrifying and I arrive at the bottom and find the lads sheltered by a building, wet through and frozen… and we still have to load the van with the bikes, etc. Thanks to Coxy’s organisation skills this is done in 2 minutes flat and we head for home. What a day! 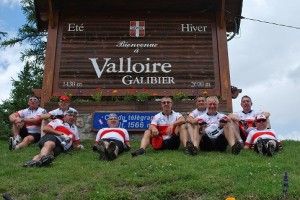 You can see more photos of this ride here