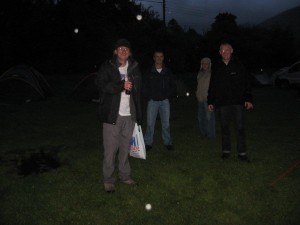 A Bank Holiday weekend means a bike trip and the final away weekend of the season. A nice easy jolly? Not a chance as we head for the Lakes and the legendary Hardknott pass.

We set off in the cars at 5.30pm on Saturday and head over the Pennines to the Lake district where we are staying at Braithwaite near Keswick.

The weather is grim on the way over and the rain torrential when we arrive at the already waterlogged camp site. A brief respite allows us to get the tents up and then head to the pub for refreshments.

Sunday morning sees the weather a bit brighter and after a full breakfast at the camp site cafe we drive over to Ambleside and then the lads head to Langdale and the start of Wrynose Pass.

The road is narrow, one car only but with frequent pull over points to allow traffic to pass. And steep, very steep with many blind hair-pins. The gradient in places is over 30% and it’s a really tough slog to the top in worsening weather. 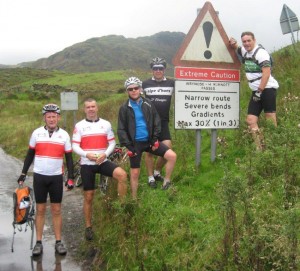 I pause half way up to take some pics and spot several cars stalling and getting into difficulty. One comes to a complete stop with smoke pouring out from under the bonnet as this inexperienced driver burns out his clutch on the steep climb.

It’s not really a road for the casual tourist and the cars are becoming a problem for the lads as the battle their way up.

An exiting descent down the other side is all too brief as they now have to tackle the even steeper and more dangerous Hardknott pass. I stay behind the lads on the way up as there is no room to pass and the gradients get harder and harder.

We eventually make it to the top and begin the most hazardous descent I’ve seen yet. I’m glad I’m in a car and not the usual van as the hairpins are incredibly tight.

The lads make it down before me and we stop at the Hardknott Pass Inn for lunch.

We now have two choices, either the lads go back the way they have come or they can go a very long way round via Broughton, along past Coniston Water and back to Ambleside. I know which way I’m going and I take the longer scenic route. The lads tackle the passes again as the weather takes a turn for the worst.

It’s another tough slog over both passes for the lads and on the final descent Steve locks out on a hairpin and takes a tumble. Ade coming up behind can’t avoid him and both go down in the pile up. Both are OK are head on to the meet in Ambleside.

In the pub that evening we all agree that this route over the Wrynose and Hardknott passes is one of the toughest we have encountered. Definitely the toughest in England and tougher than most of the Alpine climbs we have done. Although shorter than many of the climbs in the Alps these two passes more the make up for that in their sheer steepness. Not a route for the faint-hearted! 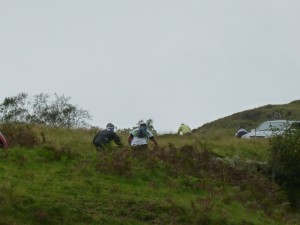 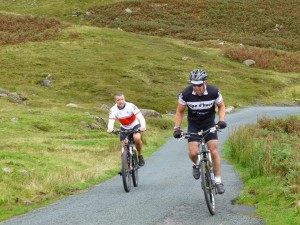 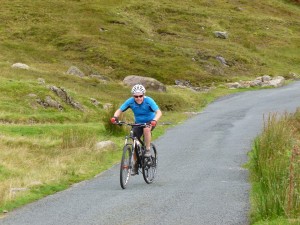 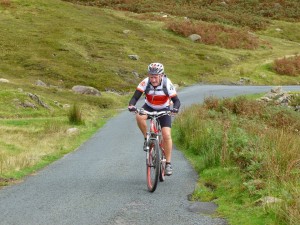 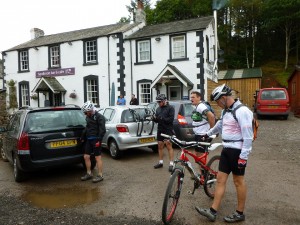