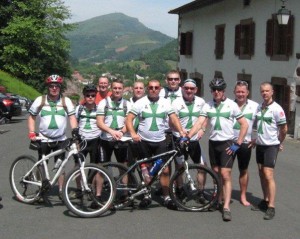 At the start in St Jean

Just a couple of issues with that. The first 12 miles are a climb to 4,600 ft. The toughest ascent on Camino and this was day one.

And at 1 o’clock on the France / Spain border the sun is at it’s peak. Coxy denies setting the start time to make the challenge even tougher but I don’t think anyone believes him.

The ride was tough and everything the lads expected but they stuck together, each riding at their own pace and then stopping every 600 ft. of ascent to let everyone catch up and take a well earned breather.

The tough slogs up hill were followed by equally intimidating down hills but everyone enjoyed these hairy moments.

The whole section took 5 hours to complete but there were frequent stops and a longer one for lunch at a handy bar near the summit. Breathtaking views. 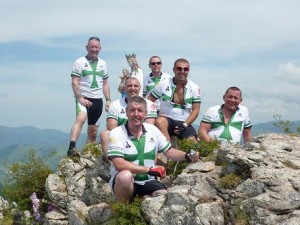 We stayed in the Hotel Burgette which is where Ernest Hemingway stayed on his many visits to the Basque region.

Great hotel and rooms and this time a set meal. As we sat outside Wagga announced it was trout all round but was howled down by the meat eaters. 9 steaks and 3 trout was the order with Wagga, Steve and Howard going for the fish.

Both options were excellent and were preceded by a very tasty bean soup (tasted a bit like pea and ham) although John describes it as baked beans with oxo (that was before he’d tasted it.)

Went to have a wander round Burgette but it’s a one street town and everywhere was shut! They must have heard we were coming. The whole place was shuttered up. As we walked down the deserted street it was like a scene from a spagetti western minus the dead guy on the horse.

Back to the hotel then for a few beers, red red wine and an early night. Honest. Billy really was in bed for 9.00pm as he needs his beauty sleep.

Just us at the hotel and a couple of Germans. No one mentioned the you know what. 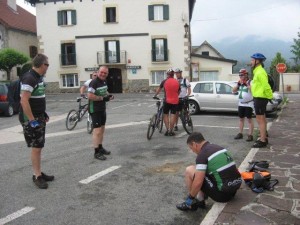 Priest liked you blog and highly commended the writer. £100 donated from Churchill Insurance through John s sister Elizabeth. Keep up the daily blog, we thorough enjoy it. Kathleen