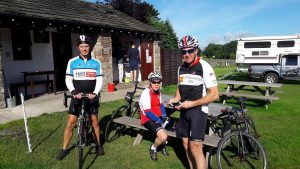 As perhaps the last outing of the summer a few of the lads decided to head to Dentdale in Cumbria and in the Yorkshire Dales National Park.

The plan was to camp overnight on Saturday in the village of Dent and then ride back to Boro on the Sunday.

A couple of the girls came along to enjoy the fun, Dawn and Karen and I joined in to bring one of the cars back and support the lads on the ride back.

We meet at the Cora, load up the cars and set off. Traffic problems around Darlington meant we did not use the A66 but used the winding back roads via Scorton, Richmond, Leybourne, Hawes and on to Dent.

It’s a bit of a slog and we take 2 hours to get there but at least the weather has improved, the rain has stopped the and sun’s come out.

We pitch tents and head to the Sun Inn hoping to catch the Boro match but no luck out here in the sticks. After a few beers here we decamp and head to the other pub for eats.

After a lively evening we head back to the tents hoping to see the forecast meteor showers in the clear starlit sky.

We do spot a few shooting stars but walking along in the pitch black while looking up isn’t the best plan but we make it back to the tents in one piece. 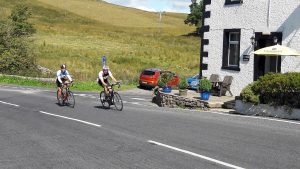 The next morning is chilly but the sun is coming up and we get ready for the ride after some breaky.

The girls head straight back to the Boro and I follow the lads out of Dent to the turn off for Dent station and the first climb up Garsdale Head.

This is a tough climb straight from the start and the lads are regretting those last few beers in the Royal George.

We get to the top and then descend down into the valley towards Askrigg. From there the plan is to turn left and go over Oxnop Scar to Muker.

However on route to the Scar turn the lads pass the turn off to the famous Buttertubs Pass and we decide we can’t resist giving this one another go. (We have done this a couple of times in the past.)

It doesn’t get any easier and it’s a long hard climb up to the summit and then down the fast descent into Muker for lunch. From here we set off in glorious sunshine toward Reeth, Richmond and Scorton.

Turns out Coxy is on a mission on this part of the route. One of his fellow Cleveland Wheelers has the best time on Strava from Gunnerside (which is just down the road) to Scorton and Coxy wants to beat it.

So the lads set off at speed while I head off ahead of them to wait at Scorton.

I park up at the pub, get a drink and sit down outside in the sun. I’m expecting to be here a while but within a few minutes Coxy comes flying round the corner to complete his time trial!

And he’s beaten the best time by a full five minutes so well done for that!

Spenna and Ade turn up not long after and after a short pause we all head back to the Boro.

A good day and a great weekend! 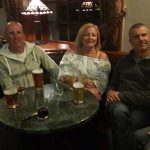 At the Sun Inn in Dent